They're Off and Running: From Jockey to Starter por Cathleen Mills-Whitlatch 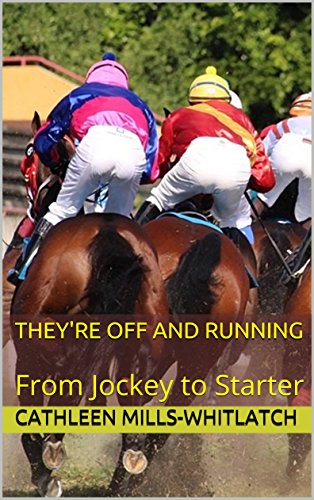 Horse racing.  From 1929, starting out as a 14year old jockey, Bill Mills relates interesting stories from his life around horses, the race track and becoming the starter at the famous Santa Anita race track in Arcadia, California.  Hear about the highs and the lows of traveling the country, going from city to city and working different horse race meetings.  Each race track has its own personality and its own different working crew. I find older peoples stories to be quite interesting.  Going down memory lane leaves me feeling uplifted. "When I was in school, I was always so small and I think the reason I was small was because us kids never had enough to eat.  So some people said I should be a jockey because I was little.  I only weighed about 90 lbs.  They told me about a couple of guys from Idaho that had become famous jockeys and so forth.  I was about 14."  "Racing was very small in those days.  We only raced, in the United States, they only raced at Louisville only in a short meeting in the summertime.  As far as winter racing was concerned Tijuana was the major track on this continent and then there was a race in New Orleans and Havana, Cuba"  Get the book to read all the great stories.