U-Boat 977: The True Story of the U-Boat That Escaped to Argentina por Heinz Schaeffer 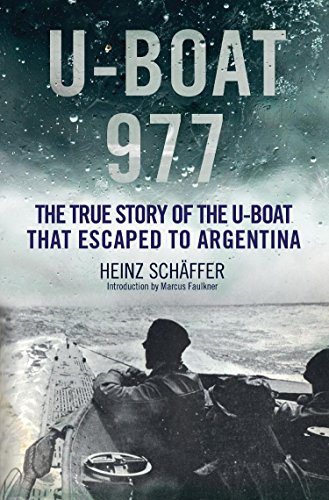 When it was first published in 1953, opinions were sharply divided between those who deplored the apparent extolling of a vicious form of warfare, and this who found in Heinz Schaeffer’s account a revealing picture of the German Navy’s training and methods.U-Boat 977 was the German submarine that escaped to Argentina at the end of World War Two. This epic journey started from Bergen in Norway, where in April 1945 it was temporarily based, and took three and a half months to complete. Because of the continuing Allied naval activity the commander decided to make the first part of the journey underwater. Before surfacing near the west coast of Africa U-977 had spent a remarkable sixty-six days submerged.Heinz Schaeffer, the commander of U-977 wrote a full account of his career that culminated in this last command. It depicts the grueling aspects of a submariner’s life aboard a vessel that was subjected to harsh conditions of the sea and oceans. As an experienced commander Schaeffer took part in many of the decisive U-boat operations in the North Sea and Atlantic Ocean. In the final months of the war, and in common with most surviving U-boat commanders, Schaeffer and his crew came under constant attacks from Allied aircraft and surface ships.The final part of U-Boat 977 is Schaeffer’s account of the journey to Argentina and lays to rest some of the more fanciful sorties that followed its arrival.